Climate change and energy security are two main concerns in the current era of civilization.

Climate Change. Dependence on fossil energy in driving the economy has a negative impact on human and environmental health globally. In reducing further costs and resulting damage, the world together responds to climate change through the Paris Agreement in limiting the rise in global temperatures to the 1.5oC level. In particular, Southeast Asia as a fast-growing economy region reinforced its commitment to a low-carbon economy through ASEAN’s renewable target.

Energy Security. Increasing energy consumption due to economic and population growth and diminishing energy availability are driving the world to find new sources of energy that are easily accessible, abundant, and sustainable.

Countering those issues, solar energy presents as one of alternative solutions in achieving energy sovereignty and low carbon economy. However, the geographical location of a region also determines the amount of potential solar energy to be harnessed. Fortunately, due to its location nearby the equator, solar energy is generally favourable in Southeast Asia. The region has a longer duration and a higher level of solar energy intensity compared to other parts of the hemisphere. Recognizing this privilege, we should push more on the technology and investment to accelerate the transition to solar energy effectively.

Major advancements in solar energy technology have critically cut the cost of solar installation, even setting records of all-time low. This makes solar business more attractive to investors. Globally, including in Southeast Asia, solar energy investment and deployment is growing faster than another alternative energy sources. Various types of solar energy innovations emerge on the surface, but the most popular solar applications are solar-rooftop, floating solar and solar farm.

Solar-rooftop. Solar PV rooftop could answer land issues and build new business models so that the community can participate in the achievement of Sustainable Development Goals targets. Economically, Solar-Rooftop could be a great option to reduce monthly energy expenses and increase energy-efficiency for homeowner/businessowner. This transforms consumers into prosumer (producer-consumer), which means homeowners or businessowners could sell excess power back to the grid. Recent application of ICT in form of Blockchain Energy trade technology further enables on-grid electricity trade, forming new business model in power system. However, this technology is still in early stage technically and requires further study in terms of policy.

Floating Solar. Floating solar or “Floatovoltaics” are solar energy placed on bodies of water, which are typically cooler than the air and help keep the panels cool and working efficiently (panels most efficiently working at temperature under 25oC). As an additional benefit, Floating solar also unlock lots of new possibilities regarding finding space.

Solar Farm. Unlike residential and commercial systems, Solar Farm is strategically installed in area which has high peak sun hour (PSH), near the load and arranged centrally. This scheme is commonly used as utility-scale solar energy. It faces some challenges, though, such as requiring incredible amount of land space—to be able to generate big enough power (typically above 200 Mwp)—and reliable transmission capabilities.

In recent months, a lot of solar projects in the Southeast Asia have been carried out.

Vietnam, the chair of ASEAN, showed remarkable progress in solar power development. There are around 16 solar power projects during Oct 2019- April 2020 period (including private project). Even during this challenging time, on 11 June 2020, the Prime Minister has approved in principle for a pilot program on direct power purchase agreement between renewable energy generators and big scale customers.

Singapore has been pushed heavily its solar rooftop programme.  The Housing and Development Board (HDB) has awarded the fourth solar leasing tender to Sunseap Leasing Pte Ltd under the Fourth Solar Novar programme, a whole-of-government effort jointly with the Singapore Economic Development Board, to promote and demand for solar photovoltaic (PV) systems across government agencies to achiev economic scale, and to drive the growth of Singapore’s solar industry

In the Philippines, industry sectors participations are highlighted by installation of rooftop solar in operations sites, such as those of Coca-Cola and Alaska Milk Corporation. 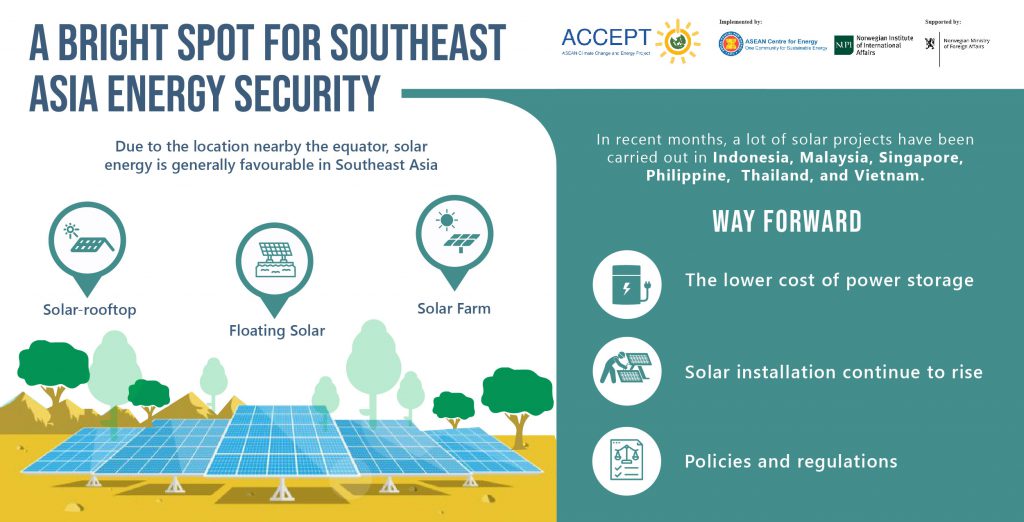 Due to the revised renewable energy program and supporting ambitions performed by government, finance, and, private sector, Southeast Asia solar power showed remarkably improvement, increasing its share in power mix. The region sought to optimize its huge solar energy potential, which could serve as pioneer toward clean energy in the future. In addition, Solar price has been pushed down further and further. Several calculations showed that customers could reach breakeven point after about seven to eight years of solar power utilization, due to electricity bills saving.

Several innovative programs have been developed as well, to assist consumers on financing the upfront installation cost. These include solar loan or solar lease schemes. Even so, there is still an issue of relatively high cost of power storage, which is generally deemed as key puzzle piece to unlock full solar capabilities. The lower cost of power storage which are used to store energy given the intermittent nature of such power, could enhance the cost-competitiveness and further spur the growth of solar industry. However, in the meantime, we expect to see solar installation continue to rise as prices fall, supported by policies and regulations. Such developments are hopeful signs for alternative energy solution in Southeast Asia to support its energy sovereignty.