As countries worldwide aim to limit global warming to 2°C from the pre-industrial level, climate change mitigation efforts have become keys to sustainable development. This, of course, includes the implementation of renewable energy to produce clean energy. Amidst the clear role of renewable energy in climate change mitigation, unlocking its full potential would need support from energy storage technologies.

Renewable energy has several advantages. Its sources are generally “non-exhaustible”, such as sun, wind, and water. Renewable energy technology also requires less maintenance because technologies such as solar panels and wind turbines do not use combustible fuels; solar panels do not even have moving parts. And more importantly, since the generation doesn’t produce greenhouse gas (GHG) emissions, the use of renewable energy will not negatively affect the environment.

Energy storage also serves as a ‘broker’ between generation and distribution system, stabilising the energy flowed to the grid. Further equipped with advanced electricity system planning and control, including the application of smart grid technologies, renewable energy can potentially substitute coal as baseload generation.

Furthermore, the more solar and wind powers that are installed, the more economic benefits that can be reaped. These include more occupations related to renewable energy and energy storage, such as design, fabrication, transportation, and project development and management. It also provides a new source of income for rural landowners and tax revenue for wind and solar development areas.

The Philippines introduced a Renewable Energy Act in 2008. This act was later supported by the 2012-2030 Philippines energy plan and the formation of an energy regulation commission that decided that to integrate renewable energy into the network, reliable energy storage was needed. Energy storage projects developed by companies such as AES, Solar Philippines, and Manila Electric Co. AES then successfully completed energy storage in the form of the first network-scale battery in Southeast Asia in 2016, and plans to build even more energy storage facilities of up to 250 MW. Solar Philippines received approval in 2017 for a 150 MW solar power project equipped with a 50 MWh battery in Concepcion and has plans to build a microgrid system in Mindoro equipped with batteries.

The electrification of 100% is a major goal to be achieved by Indonesia. However, the fact that Indonesia is an archipelago, this target must certainly be achieved in a different way from countries whose geographical conditions consist of only one plain. It is impossible for Indonesia to achieve this target if it uses only one large grid. The thing that must be done is to exploit the potential of each region by making microgrids and supplementing them with energy storage technology to ensure that energy can be accessed 24 hours a day. The project that has been implemented is the microgrid project on Sumba Island. A 400kW flow battery energy storage system has been used to integrate renewable energy into the Sumba Island microgrid to improve power quality and system stability.

Meanwhile, Singapore has begun to increase attention to energy storage systems and has even established an Energy Storage Program worth of S$ 25 million to support the development of energy storage technologies and support the penetration of renewable energy into the network. In October 2017, two Singapore consortia were launched by the Energy Market Authority and the SP Group (Singapore utility) to launch the first utility-scale energy storage system in Singapore. The consortium has a target capacity of 4.4 MWh of redox flow and lithium-ion batteries in two test sites at a cost of S $ 17.8 million in the north and northeast of Singapore. 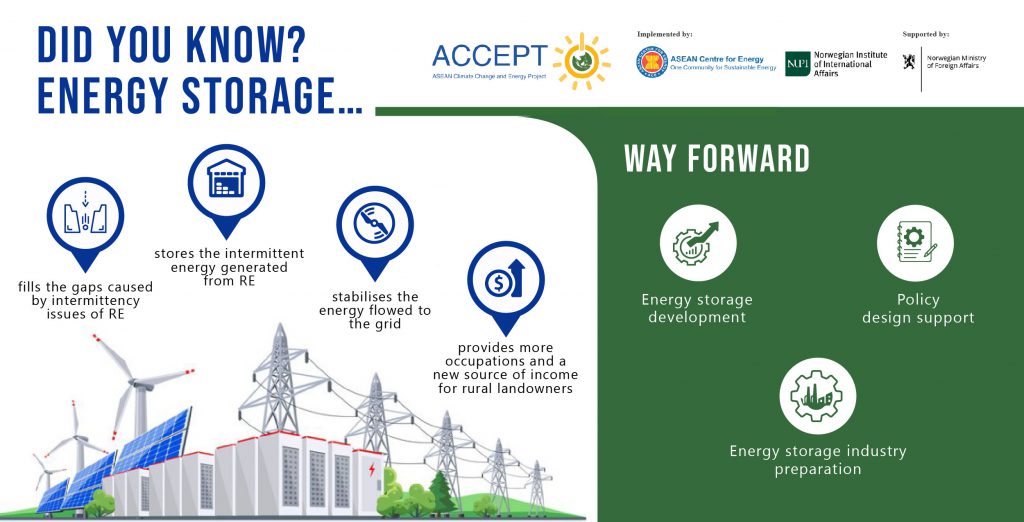 Utilisation of energy storage will certainly provide various benefits such as increasing the portion of renewable energy for energy supply by providing a more efficient and stable grid. It is also good for the environment as it reduces the GHG emissions from excessive use of electricity. Together, energy storage would increase the economic feasibility of wind and solar power and strengthen their competitiveness in the transition to clean energy. It would also provide more jobs related to energy storage, e.g. manufacturing, engineering, etc. Furthermore, it can even support island nations to achieve a 100% electrification ratio by utilising energy sources available on each island.