With around 17,000 islands, it is the largest archipelagic country in the world.
It has the largest population and the highest GDP in the ASEAN region.
Traditional biomass and oil are the main sources for non-fossil fuel and fossil fuel types.
Oil are the main energy source used by the end users, followed by gas.

Indonesia is the largest archipelagic country in the world, comprising around 17,000 islands. Its population counts to 261 million[1], making it the fourth most populous nation in the world. Indonesia has the highest GDP in the ASEAN region with USD 1 trillion in 2017 and it is the only ASEAN member who is part of the G-20. However, in terms of its GDP per capita, in 2017 it is amounted to USD 3,871[2] and it takes the fifth place among the Southeast Asian countries. Indonesia is a presidential constitutional democracy, in which the political power is to a considerable extent decentralized to provincial and local governments. Jakarta is the capital city of Indonesia and the largest metropolitan area in Southeast Asia with tremendous population growth and a wide range of urban issues. Bahasa Indonesia is the official language and spoken throughout the country, while English is commonly used as the business language. 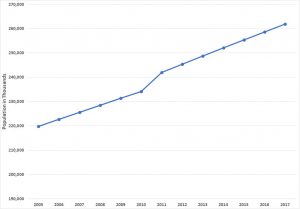 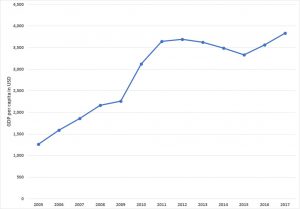 Indonesia has diverse energy sources used in TPES. Traditional biomass and oil are the main sources for non-fossil fuel and fossil fuel types.

Oil are the main energy source used by the end users, followed by gas. Electricity in TFEC is only about 16%, which indicates that the grid-connected electrification in Indonesia is relatively low.

Source : UNFCCC NDC – Indonesia
Powered By :
AEDS
DOWNLOAD PDF
Indonesia has committed to reduce unconditionally 29% of its greenhouse gasses emissions against the business as usual scenario by the year of 2030. The BAU scenario is projected approximately 2,869 GtCO2e in 2030 which is updated from the BAU scenario on the INDC due to current condition on energy policy development in particular in coal fired power plant.