Vietnam‘s Energy Development in the Context of Climate Change

According to the latest statistics in the Statistical Yearbook of Viet Nam in 2018 published on the production energy structure, the total primary energy supply in 2017 reached 72,688.3 KTOE, an increase of 1.8% compared to 2016 and 3% compared to 2015. The two largest components in the structure are coal and crude oil, which reached 21,412.7 KTOE and 13,828 KTOE, respectively accounting for 36% and 23%. Natural gas, biomass, and electricity account for approximately the same proportion of about 13 to 15% (Figure 1). Figure 1. The proportion of energy sources of domestic exploitation in 2017

The total amount of exploited and domestically produced energy sources in 2017 reached 59,745.8 KTOE, a decrease of 13% compared to 2015. Industry and construction are the largest energy consumption sectors by nearly 53% (Figure 2). 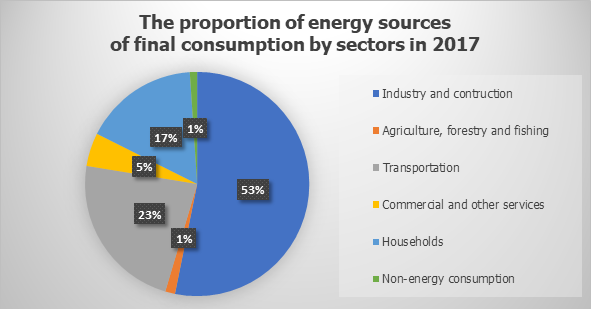 Figure 2. The proportion of energy sources of final consumption by sectors in 2017

Vietnam’s economy has grown rapidly with an average GDP growth rate of nearly 7% per year over the past two decades. However, this growth is assessed to have high energy intensity and greenhouse gas (GHG) emissions, still tend to increase sharply. Shifting towards a low-carbon development roadmap not only benefits the global climate but also makes the economy more efficient and competitive, increases the level of supply diversity that contributes to energy security, creates environmental and social benefits.

Recognizing the above problem, Vietnam has implemented policy measures to promote the development of a low-carbon economy in order to reduce GHG emissions such as National Strategy on Green Growth, and National Strategy on Energy Development. The amount of renewable energy (RE), and in particular, the Nationally Determined Contribution (NDC) Report, underlines the government’s commitment at COP 21 to reduce GHG emissions by 2030 by 8% compared to emission of the normal development scenario using domestic resources, and likely to be reduced by up to 25% in case of international assistance.

Immediately after the submission of the proposed NDC, a series of important policies on the energy sector, especially the energy and electricity suppliers, were signed by the Prime Minister and will be implemented in the period of 2016-2030, including:

In 2011, Vietnam approved the National Power Development Plan (PDP VII), which set out a scenario of rapidly increasing electricity demand, and mainly supplied by fossil-fuel power plants. In PDP VII, the electricity increased from 194 TWh in 2015 to 695 TWh in 2030. Most of this rapidly increasing demand is provided by fossil fuels that accounting for 70.8% of the electricity produced domestically in 2030, in which coal thermal power account for 56.4%. The basis of this rapid expansion is the estimated GDP growth rate of 8.0% in the period of 2016-2020 and 7.8% in the period of 2021-2030, combined with the elasticity coefficient between electricity demand and GDP which will be greater than 1 until 2020.

The increase in electricity demand calculated above is based on the optimistic scenario of the GDP growth rate. However, under the direction of the Government, from the beginning of 2014, the Ministry of Industry and Trade held a review and updated the growth needs to revise PDP VII. After reviewing and evaluating, PDP VII was amended in Decision No. 428 / QD-TTg dated 14th March 2016 by the Prime Minister. Accordingly, lower electricity demand levels stem from lower rates of economic growth than previously expected. By 2030, electricity production is expected to increase to only 574 TWh instead of 695 TWh as in the original PDP-VII. In the revised PDP VII, the structure of the power source has shifted significantly towards the development of more than the proportion of RE sources, although fossil-fuel electricity still dominates (by 2030, 53.2%). The electricity produced is from coal-fired power plants).

The table below illustrates the changes in Vietnam’s electricity structure until 2030 between PDP VII (2011) and revised PDP VII (2016).

It is realized that energy efficiency (EE) is the short way to obtain sustainable energy since it provides benefit for various aspects such as the reduction of investment for energy supply, energy intensity, pollution, and GHG. With the achievement of national target program on EE period 2006-2015, Vietnam has continued to implement the new national program on EE during 2019-2030 by Prime Minister’s Decision 280, dated 23th April 2019 (VNEEP – Vietnam energy efficiency program). It is believed that the energy-saving is not only to help the country in energy consumption efficiently but also to contribute significantly to GHG reductions of the country, especially since energy utility in industry and the commercial sector takes into account for 30-40% of total energy consumption.

The overall target of the program is mobilizing all domestic and international resources to promote EE through the synchronous implementation of state management tasks and measures, technical assistance, scientific and technology research, product development, market transformation, training and development of human resources, making use of experience and support of the international community in the EE sector.

Doing VNEEP, a number of regulations has been issued, which is great contributions to EE to the economy and supporting narrow gap of energy intensity of the country. For the industry sector, at least six circulars on minimum energy performance standards (MEPs) have been enforced including such sub-industries as steel, chemical, paper, sea food processing, sugar cane, and plastic.

For this program more and more activities will be doing for those of working in:

With many policies to support RE development, RE achievements are significant for clean-energy target in Vietnam. With potential solar and wind sources, RE capaicty in Vietnam will be more and more attractive to investors by the next decade. For EE, Vietnam expected to have greater development in all aspects of society, much more opportunities to explore the deeper works and solutions for enhancing EE for all economy sectors toward low carbon development, greener and cleaner energy, and NDC targets for Paris Agreement.

Focal Person of Vietnam on Energy for ACCEPT

Engaging different policies development and implementation program for energy efficiency, renewable energy such as national program on EE period 2019-2030, master plan on energy and power development plan by next 10 years 2021-2030 and vision to 2045.