From Waste to Wealth: A Story of Green Coke

According to a report by the International Energy Agency, energy trends in the world over the next 20 years will strongly depend on Southeast Asia’s energy consumption. This is because the growth of energy demand in the region is growing two times faster than the average global growth, which will be accompanied by economic growth as well as challenges for policymakers.

The increasing need for energy is in line with the increasing demand for fossil fuels, including petroleum products. Currently transforming into a net oil importer, ASEAN member states will be faced with an energy trade deficit that could reach USD 300 billion in 2040, if there are no changes in the oil import policy. This condition is certainly not favourable because of the volatile oil prices, making the ASEAN member states vulnerable to geopolitical events.

As reported in the 5th ASEAN Energy Outlook (AEO5), the oil will continue as the main source of fuel for the transport sector in Southeast Asia. This accounts for about 45% of total final energy consumption (TFEC) during the projection years, until 2040.  The oil energy demand in the region is expected to grow 60% by 2040. If today the demand for oil reaches 6.5 million barrels per day (mb/d), in 2040 it will reach 9 mb/d.

The increasing demand for oil will lead to higher production and processing of oil and its derived products. In 2015, the combined ASEAN oil production amounted to 2.4 million barrels of oil per day, with the majority was contributed by Indonesia and Malaysia at 35% and 25%, respectively. The refinery processes of crude oil into petroleum products produce a lot of by-products or wastes.

One of the produced wastes is in the form of petroleum coke and in its raw form, which is also called “green coke” or green petroleum coke. Green coke is the main solid carbonization by-product from a high-temperature hydrocarbon fraction process. This waste by itself has several potentials, since it has a higher calorific value than coal, is easily stored, and produces less pollution than coal. Generally, green coke is sold as is to be applied as raw material for making calcined coke, as well as for cement plant, metal smelting, and electricity generation.

However, green coke is generally sold at a very cheap price, which is in the range of USD 0.17/kg (Zauba Technologies & Data Services). At first glance, it might not be a big issue. Since basically green coke is a waste product, people might think that “if someone wants to pay then it’s good enough”. But, looking deeper into the potential of green coke, we can turn this waste into a product with a higher value. One of them is activated carbon. The price of activated carbon on the market is reported to reach USD 5/kg, almost 30 times the price of the green coke.

Activated carbon is valuable due to its various benefits, such as wastewater treatment, air and gas purification, food processing, and catalysts. In fact, nowadays, activated carbon is used in cosmetic products as well. Such potential uses make activated carbon highly sought material, with various industries interested in using it for their products. Consequently, the price of activated carbon soared. Against this backdrop, we should move forward from merely selling green coke, but process it into activated carbon first before selling it.

Researches on processing petroleum waste into activated carbon have been conducted. They showed that producing green coke-based activated carbon has its own advantages. Green Coke is already dry, meaning it has a relatively high carbon content. Whereas agricultural waste, in general, has a lot of water content, so that the carbon content is smaller. This point is very important because it means that we only need fewer steps in processing green coke into activated carbon, in comparison to agricultural waste.

Currently, Pertamina, a state-owned oil and gas company in Indonesia, already has a Green Petroleum Coke (GPC) production unit in Dumai Oil Refinery with a production capacity of 360 thousand tons per year. The produced Green Coke—currently sold as is—can be ‘upgraded’ into activated carbon, which could increase the potential revenue of Pertamina. 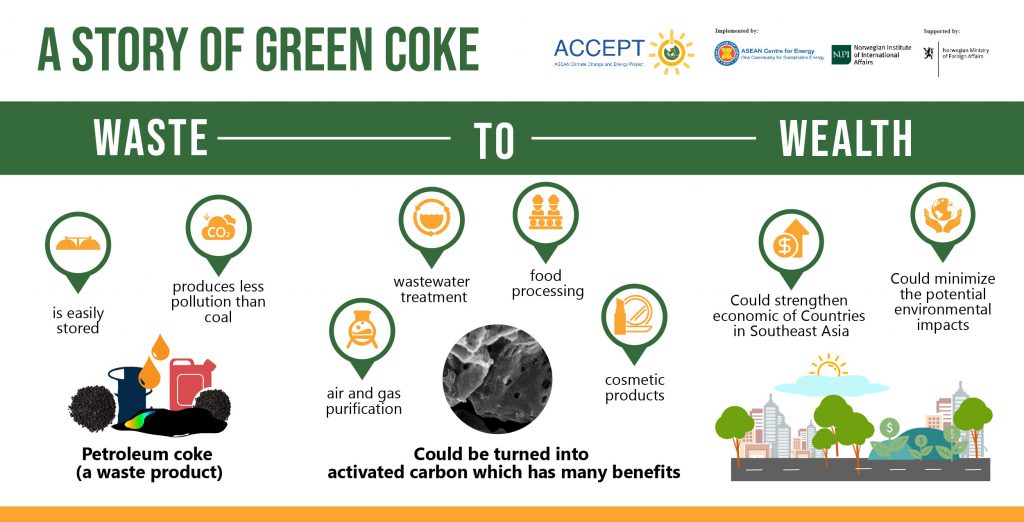 Similar studies that focus on increasing the value of wastes and by-products are conducted by researchers in Southeast Asia. Some are even ready to enter the market and be implemented in industry. The establishment of activated carbon industry based on green coke waste could strengthen the economic conditions of countries in Southeast Asia. Additionally, utilization of the waste of petroleum industries could minimize the potential human health and environmental impacts due to petroleum coke combustion. These include fugitive dust and greenhouse gas emissions, as well as runoff into waterways.