In the Philippines like the rest of the ASEAN, energy policy is at the crossroads. To support the economic and infrastructure plans, the country will need to double its power generating capacities over the next several years.

However, energy access, affordability, and sustainability also remain drivers of policies. The Department of Energy (DOE) is likewise determined to deliver on its commitment to provide total electrification throughout the country.

Greater utilization of renewable energy, efficient energy use, the promotion of alternative fuels, and technologies and energy security are also part of the policy and regulatory reform discussions. 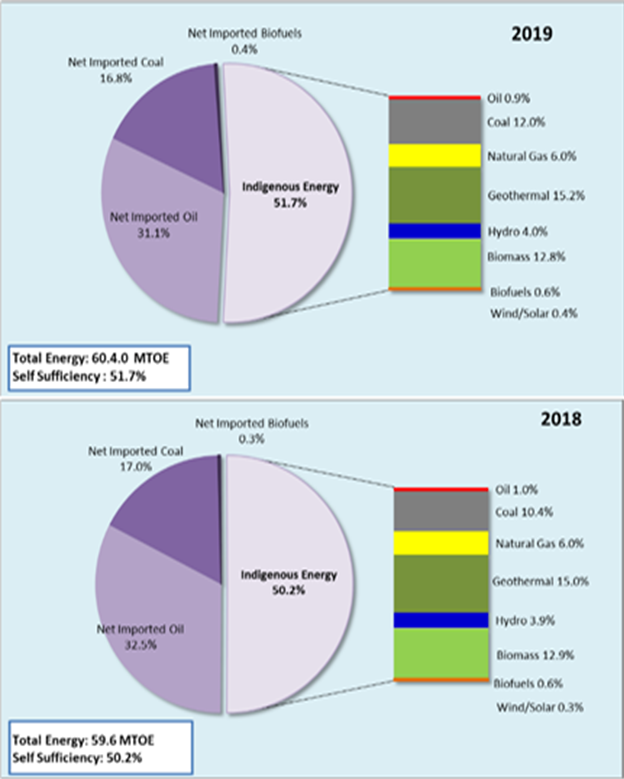 In 2019, the Philippines’ total primary energy supply (TPES) 2019 reached 60.4 MTOE, slightly higher by 1.3 percent from its 2018 level of 59.6 MTOE. Indigenous energy produced during the period accounted for 51.7 percent of the TPES with a 4.4 percent growth from the previous year’s production level. On the other hand, total net energy imports were registered at 29.2 MTOE, 1.9 percent lower than the previous level.

Oil remains to be a major source of supply, accounting to about one third (32.0 percent) of the TPES, followed by coal and geothermal, which contributed 28.8 percent and 15.2 percent share, respectively. Due to the intensified programs that promote reliable and sustainable RE resources, the aggregate supply of renewable energy went up by 1.7 percent to 20.1 MTOE, representing one-third (33.2 percent) of TPES during the period. Notable increases were reported in the combined levels of coal (6.6 percent), biofuels (6.6 percent), and wind and solar (4.3 percent) during the same period.

As of June 2019, the electrification level in the Philippines stood at 91.25% translating to 2,010,955 households which remained unenergized. The DOE is committed to completing the total electrification of the country by 2020. Various programs have been implemented to deliver on this goal including Photovoltaic (PV) Mainstreaming and the Qualified Third Party (QTP) Program.

Innovations on PV Mainstreaming adopted the fee-for-service business model which have electric cooperatives (ECs) install solar home systems (SHS) within their franchise areas and sells electricity using a prepaid card. Under this scheme, both EC and the homeowner share the responsibility for the SHS which ensures sustainability.

The DOE broadly looks at energy security from the perspective of supply and disaster-resiliency for the energy sector. In terms of supply security, the DOE has pursued a technology-neutral approach. The on-going Philippine Energy Contracting Program (PECP) which calls on investments for the upstream coal, oil and gas sector is under this thrust as well as the Philippine Downstream Natural Gas Regulations (PDNGR).

As of 2019, there are already 20 petroleum service contracts and 35 coal operating contracts (COCs) in the country with of production, 776.1 thousand barrels of oil, 155.7 million standard cubic feet of gas, 4 million barrels of condensate and 15.25 million metric tons of coal were produced from January to December 2019.

A Work Plan under the Nuclear Energy Power Implementing Organization (NEPIO) has been formulated that explores the inclusion of nuclear power in the Philippine Energy Mix. Guiding principles of the Work Plan include 1) the formulation of clear government policy direction, 2) the establishment of a necessary legislative framework, 3) alignment of the nuclear program with national and international technical and safety standards, and 4) securing public and stakeholder acceptance.

The DOE broadly looks at energy security from the perspective of disaster-resiliency for the energy sector. As the country remains vulnerable to typhoons and other natural disasters, the DOE is keen on providing continuous energy supply to sustain economic growth. The Energy Resiliency Policy aims to strengthen existing infrastructure facilities, incorporate mitigation improvements into the reconstruction and rehabilitation, improve operational and maintenance standards and practices, and develop resiliency standards.

An Energy Resiliency Roadmap is currently under development In line with the framework and policies under the National Disaster Risk Reduction and Management (DRRM) Plan 2011-2028 which covers:

A Decade of Renewable Energy

Encouraging the implementation of Renewable Energy (RE) has been a state policy with the passage of the RE Act in 2008. This is a recognition of the significant contribution RE plays in reducing carbon emissions. A decade on, all policy mechanisms under the RE Act have been issued. The RE Market was established as a market for trading RE Certificates. The Renewable Portfolio Standards (RPS) Rules were put in place requiring electricity suppliers to source an agreed portion of their energy supply from eligible RE resources. Last year, a major overhaul of the RE contract process was instituted resulting in the streamlining of the award, administration of contracts including the issuance of permits, endorsements, and certifications.

Energy Efficiency and Conservation as a Way of Life

After three decades, 2019 also marked the passage of Republic Act No. 11285 or the Energy Efficiency and Conservation (EEC Act). The EEC Act serves to create the institutional framework across various sectors to promote energy EEC practices as a way of life in the country. On the part of the government, the EEC Act institutionalized the Government Energy Management Program (GEMP) and expanded its coverage to include local government units (LGUs). To further accelerate the adoption of EEC, the existing Energy Service Companies (ESCOs) accreditation process will be strengthened. ESCOs must possess the technical capability, financial stability, and compliance to legal requirements to under EEC projects. As of the end of 2019, 33 ESCOs have been certified by the DOE.

More policies are in the pipeline to fully implement the EEC Act in the coming year. Energy labeling will become mandatory for all energy-consuming products (ECPs) under the Philippine Energy Labeling Program (PELP) including Fuel Economy Performance Ratings for Transport Vehicles. The concept of Minimum Energy Performance for Products (MEPP) will be introduced under which no ECPs will be allowed for sale unless compliant with the set MEPP. As a general requirement under the Designated Establishments, entities will be required to come up and implement their respective EEC plans across their offices, plants, and facilities. To enforcement and compliance, the EEC Act provides administrative, civil, and criminal penalties.

The DOE is continuously implementing alternative fuels and energy technologies to diversify the sources of energy with the end in view of promoting sustainable consumption and ultimately a reduction in carbon dioxide emissions. Emphasis has been placed on the transport sector as it accounts for the greatest share in the use of conventional fuels.

A major push for e-mobility solutions and enhanced coordination with the Department of Transportation is on top of the agenda. Policy topics in the pipeline include the electric vehicle (EV) infrastructure regulation, a comprehensive EV masterplan, among others.

The passage of Republic Act No. 11234 or the Energy Virtual One-Stop Shop (EVOSS) Act mandated the use of an online platform to facilitate paperless applications for permits for new power generation, transmission, or distribution projects in the country. Coupled with Executive Order No. 30, series of 2017 which created the Energy Investment Coordinating Council (EICC), efforts have been made to harmonize, integrate, and streamline regulatory processes.

Ultimately, the policies should be underpinned by the tenet of supporting growth. Guided by the long-term Philippine Development Plan, economic growth must be relevant, inclusive, and sustainable. Over the next 25 years, per capita income is targeted to increase by at least three-fold. This increase in income will progressively improve the quality of life of the majority of Filipinos. Under this backdrop, the energy sector with its competing stakeholders must navigate and balance the interest with its gaze fixed on the growth. After all, it is the upliftment of the lives of the citizenry that marks the success of any policy.

Focal Person of Philippines on Energy for ACCEPT

Patrick T. Aquino currently the Director of the Energy Utilization Management Bureau under the Philippine Department of Energy (DOE). His engagement in the DOE spans over a decade, initially serving as part of the Office of the Secretary. From there, he held several key positions within the Department – in 2013, he became the Director for the Information Technology Management Service where he initiated the modernization of the Information Technology Framework of the DOE. A year after, he was appointed as the Director for the Energy Utilization Management Bureau (EUMB), and pushed for the institutionalization of energy efficiency and conservation in the country. Issuances such as the Philippine Energy Standards and Labelling Program (PESLP) along with the Minimum Energy Performance Standards (MEPS) were created during his tenure at the EUMB in 2016, which are among the essential components of the Energy Efficiency and Conservation (EE&C) Act that was enacted in 2019, after more than three decades of its initial draft in 1988 – now Director Aquino with the support of the DOE, stands at the forefront of the implementation of EE&C in the country. He is a Career Executive Service Officer (CESO) III, a distinction exclusive to civil servant who has exceptional performance and has undergone stringent screening processes which is finalized by a Presidential Appointment.

Focal Person of Philippines on Energy for ACCEPT

Engr. Obillo is currently the Assistant Director of the Energy Planning and Policy Bureau (EPPB) of the Philippines Department of Energy (PDOE) which is mandated to formulate, update, monitor and evaluate national and regional energy plans, policies, programs and projects.  She is also the head of the Technical Secretariat of the Nuclear Energy Program Implementing Organization (NEPIO) and the Project Review Committee. She is also deeply involved in the acquisition of an ISO certification for the different units in the Department. Prior to her transfer to the EPPB, she was assigned to head the Energy Resource and Development Bureau (ERDB), which handles all activities relative to the upstream oil and gas sector. Also, for the longest time in her career, she was involved in the downstream oil and gas sector under the Oil Industry Management Bureau (OIMB). She had attended several fora involving energy security specifically on oil stockpiling, biofuels, oil pricing, biofuels and nuclear.  She graduated with a degree in Bachelor of Science in Chemical Engineering from the University of Santo Tomas. She earned her Masters Degree in Public Administration from the University of the Philippines, being a recipient of the 1st Local Scholarship Program sponsored by the Philippine Civil Service Commission.