The session was started with welcoming remarks from Dr. Nuki Agya Utama, Executive Director of ACE, and H.E. Morten Høglund, Ambassador of Norway to ASEAN. They highlighted the importance of carbon pricing as an effective policy instrument to accelerate the low carbon transition in ASEAN by reflecting the know-how experience from Norway. This discussion is also expected to serve as a solid information sharing platform for mitigating climate change. 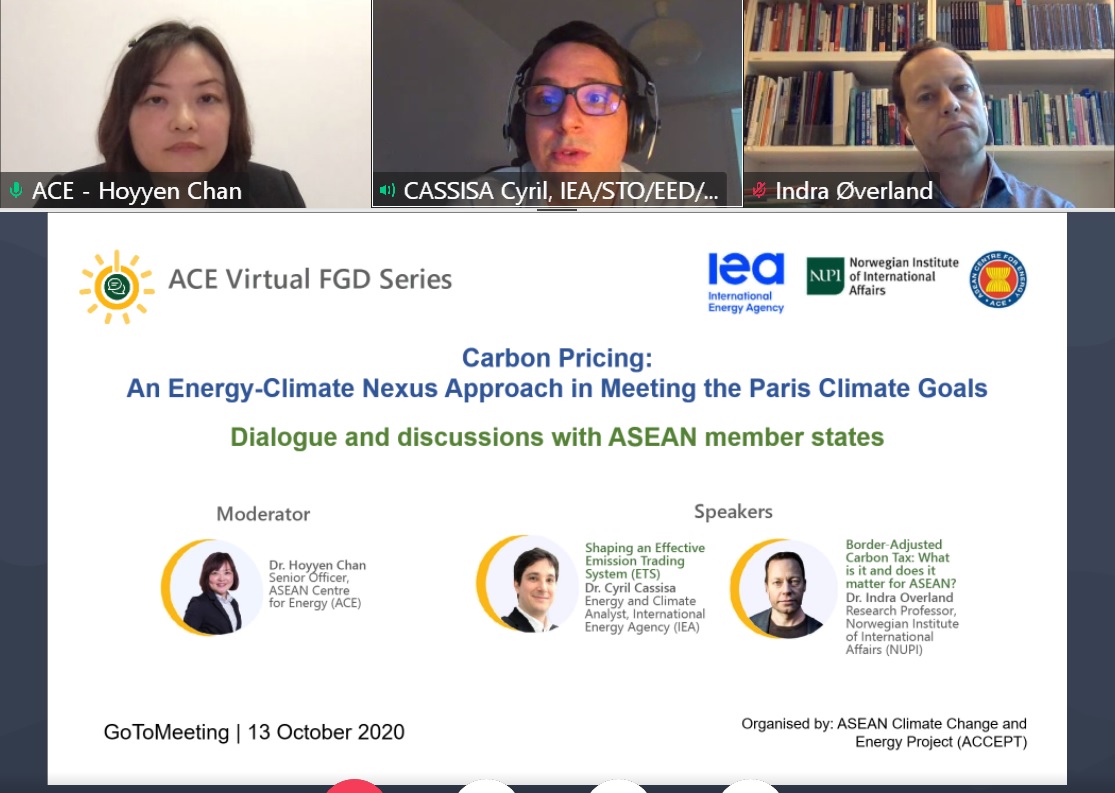 The first sharing session was given by Dr. Cyril Cassisa. He explained the Emission Trading System (ETS). ETS itself has been used in various countries and regions and has succeeded in producing an effective climate policy that uses market forces to reach the intended mitigated target.

ETS involves various sectors, including a different mechanism that can trigger multiple layers of actions such as fuel switches, consumption, early retirement or retrofitting use of carbon pricing revenues, and investments.

Several factors have been noted as the key for optimal implementation of ETS such as confidence in the prices of allowance, long-term policy instruments, and a flexibility mechanism to avoid oversupply & low prices due to external factors. To conclude, the design of ETS must be tailored to fit the context of each region or country’s markets and policies, in other words, there is no ‘1 fit all’ ETS design.

The second session was given by Dr. Indra Øverland. In this session, he presented the implementation of carbon pricing by the European Union (EU), how the market dynamics between borders, and the enforcement effort by punishing companies that violate regulations. At a glance the carbon tax transaction shows a significant increase in the last 2 years, however, it turns out that there are potential negative impacts.

This occurs because of carbon leakage, a type of negative spill-over effect. Stringent climate policy causes carbon-intensive enterprises to move to a different jurisdiction, leading to higher emission there instead, or so-called ‘carbon leakage’. To ensure inclusive progress as a region and justice between countries, Border Adjusted Carbon Tax could be implemented to create a level playing field.

Not to forget, he explained that carbon pricing is not only influenced by internal factors, but also by external factors such as the upcoming United States presidential election. He reminded that ASEAN could also be affected by the change of foreign policy in Europe and the United States due to regime change.

Next, was a very interesting question and answer session from our two experts and all 50+ participants from 9 ASEAN Member States.

The session was ended by closing remarks by Mr. Beni Suryadi, Project Manager of ACCEPT. Through this discussion, he hopes that Member States can gain insight on energy-climate nexus in ASEAN, specifically how carbon pricing can support ASEAN interest in meeting energy and climate targets. And he looks forward to the participation of ASEAN policymakers in the next Focus Group Discussion (FGD) that will be held on 10 November and 8 December 2020.