Some climate change impacts may have spillover he ASEAN member states are among the world’s most vulnerable countries to climate change. effects on bilateral and regional relations in Southeast Asia. Climate change could affect human security in the region by threatening traditional livelihoods, exacerbating existing intra-state security threats, transforming territorial disputes and bilateral tensions, and straining already limited resources. This can in turn incentivise inter-state competition for scarce resources and trigger large-scale migration, exacerbating old political tensions, giving rise to new ones, and causing difficulties for integration and multilateral initiatives within ASEAN.

The Global Climate Risk Index 2020 produced by Germanwatch names the Philippines, Myanmar, Thailand and Vietnam among the ten countries bearing the greatest costs in the last 20 years from climate-induced disasters and weather events. Climate change is likely to further intensify severe weather events, with significant human and financial costs for ASEAN member states. Moreover, most of their populations are concentrated along the seaboards and on flat fertile plains threatened by sea level rise. Loss of substantial territory due to sea level rise is a major threat for Indonesia, Myanmar, the Philippines, Thailand and Vietnam. Without swift technological progress, rice yields may be 50% lower in 2100 than in 1990 in Indonesia, the Philippines, Thailand and Vietnam according to a 2017 study by the Asian Development Bank and the Potsdam Institute for Climate Impact Research. The loss of agriculturally productive territory threatens food security in most ASEAN countries, as does the impact on riverine and oceanic fishing resources. The fisheries are already threatened by over-exploitation, and the acidification of oceans can harm stocks and further intensify regional competition over these resources. Furthermore, as weather patterns change, varying Himalayan precipitation will directly impact the flows of the Mekong, Salween, and Irrawaddy rivers, on which riverine communities in the Greater Mekong region depend. This might not only increase flooding, but also destabilise ecosystems and by extension fisheries. This will likely have a profound effect on agricultural communities along the region’s rivers, such as in Laos, where the agricultural sector depends on the Mekong floodplains.

Loss of livelihoods may incentivise migration, both from within and outside the region. The population of ASEAN is projected to reach 770 million in 2040, according to the World Population Review, and this may further exacerbate possible migration-related and other tensions caused by climate change. While internal migration might be possible in some cases, most ASEAN member countries do not have sufficient fertile land to accommodate large influxes of people on a long-term basis.

Rohingya children in school provided by NGOs in Kuala Lumpur

Migration is not new to Southeast Asia, especially labour migration. The status and welfare of citizens working abroad have been an area of concern in bilateral relations among regional states. For instance, around 10% of the Philippine population work abroad, with remittances constituting close to 10% of its GDP in 2019, according to the Philippine Central Bank. Irregular labour migration, refugee and repatriation issues have already caused tensions in bilateral relationships among some ASEAN member states, and migration flows of a greater magnitude could accentuate the frequency and urgency of such tensions.

Climate-induced mass migration from South Asia, particularly from low-lying Bangladesh, is a scenario that could cause significant tensions with neighbouring Myanmar or other ASEAN member states. Similarly, loss of coastal land in China raises the possibility of southward migration flows on a magnitude that could pose significant material and political challenges for Southeast Asian countries. The intractable issue of refugees, exemplified by their long-term presence in Malaysia and Thailand, as well as the recent case of the Rohingya from Myanmar, has caused tensions within ASEAN in recent years and proven a difficult topic to resolve at the regional level. Climateinduced migration flows could exacerbate such frictions.

Loss of traditional livelihoods can also make populations in impacted areas more vulnerable to recruitment by separatist and extremist groups, a recognised security threat in Indonesia, Myanmar and the Philippines, where such groups take advantage of economic grievances to boost recruitment. This equally applies to longstanding irredentist groupings and communities vulnerable to piracy, such as in the Sulu Sea between the Malaysia and the Philippines.

Geopolitically, climate change can alter the strategic calculus in the South China Sea disputes for the claimant states. Rising sea-levels might imperil manmade installations on the various reefs and island groups, while pressures on inland fisheries increase the relative importance of the fish stocks in the South China Sea. In some cases, rising sea-levels might submerge entire reefs or islands, undermining claims to Exclusive Economic Zones (EEZ) as defined in the 1982 United Nations Convention on the Law of the Sea (UNCLOS).

Aside from the direct impacts of climate change, the hitherto modest contribution of ASEAN member states to climate change mitigation may have implications for their international standing. Southeast Asia is one of the few regions in the world where coal consumption has grown in recent years, and the nationally determined contributions (NDCs) of ASEAN member states to the Paris Agreement are modest. As investors become more stringent about environmental sustainability, Southeast Asian companies and countries may lose out on muchneeded foreign investment. Limited regional cooperation on climate change mitigation also exposes ASEAN and its member states to international criticism, and limits their credibility in shaping the discourse on climate justice and sustainability issues in the global arena. 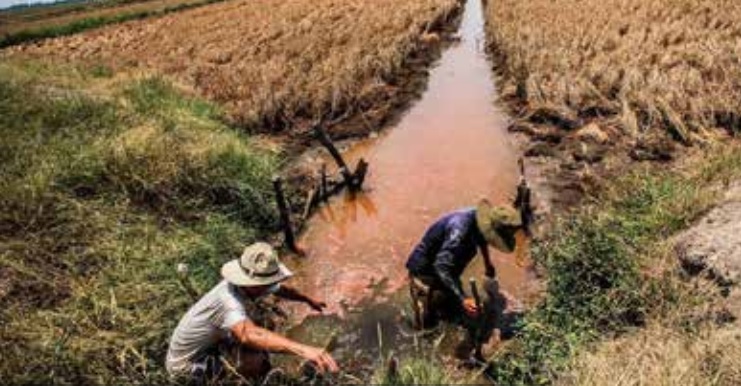 If ASEAN member states can cooperate effectively to mitigate climate change, it could preempt potential political conflicts and reputational costs, instead of allowing climate change to negatively affect regional relations and the effectiveness of multilateral cooperation. Greater tensions over migration issues and resource competition might make it more difficult to reach regional consensus, a cornerstone of ASEAN multilateralism. Climate change-induced political tensions might lower inter-state trust, which in turn can hamper cooperation in other environmental areas, such as the longstanding transboundary haze issue. Furthermore, deeper ASEAN integration in other policy fields might be further delayed as each member state struggles to adapt to a more volatile climate.

There are several policy areas where ASEAN could foster regional cooperation to counteract climate change, with the added benefit of enhancing regional trust. Firstly, the implementation of the ASEAN Power Grid (APG) should be accelerated to facilitate the expeditious roll-out of intermittent renewable energy sources such as solar and wind power by enhancing grid connectivity and utilising the region’s unevenly distributed renewable natural resources. Secondly, ASEAN member governments should develop new financial incentives and market mechanisms to facilitate investments into renewable energy projects and infrastructure in cooperation with multilateral financial institutions. Thirdly, they should engage multilateral organisations and private sector stakeholders to intensify climate adaptation measures in agriculture and river management. These measures may be financially and politically difficult to implement, yet they offer a more affordable option than the predictable and unforeseen political consequences of climate change for ASEAN member states and ASEAN as a regional community.

This Op-Ed originally appeared in the ASEAN Focus, March 2020.