On 29 April 2021, ASEAN Researchers Network on Energy and Climate Change (ARNECC) held the second virtual paper talks about Prospect of China’s Energy Investment in Southeast Asia under the Belt and Road Initiative: A Sense of Ownership Perspective. ARNECC is a public group for researchers, analysts, scholars, students, and anyone with deep interests in topics related to energy and climate nexus. It is one of the initiatives under the ASEAN Climate Change and Energy Project (ACCEPT). The first paper talks was successfully conducted on 25 March 2021.

(Photo Caption: Dr Zulfikar Yurnaidi from ACCEPT as the moderator for ARNECC paper talks #2 on 29 April 2021)

China’s Belt and Road Initiative (BRI) includes two aspects: The Silk Road Economic Belt and the 21st Century Maritime Silk Road. The main target of BRI was to develop inter-connectivity of infrastructure. As Southeast-Asia (SEA) was located at the critical point alongside the second aspect of BRI, they provide abundant resources in energy sectors. However, BRI need a huge amount of funding for the development of each state in SEA. Referring to that, China practically very likely will provides the required funding but the success of an investment project is heavily influenced by the impression to the investors. 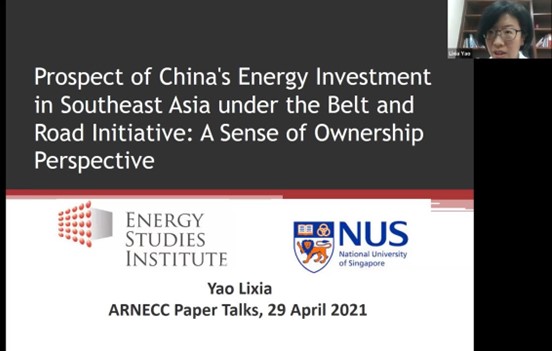 During the discussion, Dr Roman highlighted that the framework used in the paper can be very helpful for both investors and scholars. The one problem is the challenge for the government to monitor the whole Chinese companies. He also recommends that it will be helpful to describe more the perspective of Chinese government towards the investment projects, especially in SEA.

At the end of the event, the moderator asked Dr Yao about how the countries in ASEAN can attract more investments, especially in the clean energy. She answered that the SEA countries still need huge amount money to finance their energy projects, thus it is important for local government in each member state establish a friendly environment policy to attract more investments.