During the webinar, Mr. Rizki addressed the important energy-climate understanding for youth through four key topics that young people should be aware of, including why the change from fossil fuel energy to green energy is so critical today. 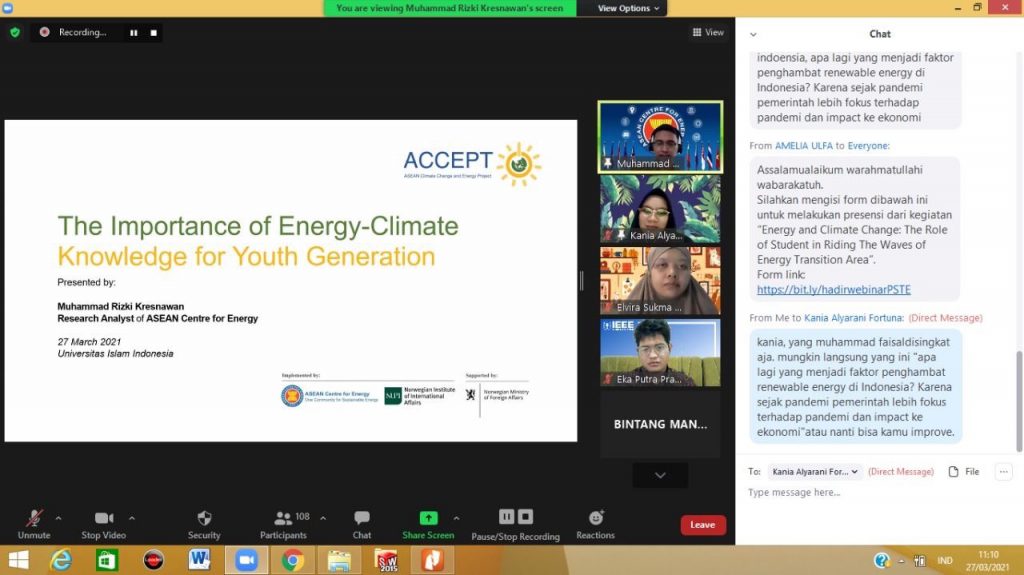 Based on his experience in working energy-climate issues in ASEAN region, he started to clarify how global warming occurs and what the primary cause is that usually lied by the misconception. Then he proceeds to put the ASEAN energy landscape background in order to give the participants a viewpoint on the current situation of the ASEAN energy landscape, which is still dependent on fossil fuel, and the effect of the generated pollution on the atmosphere.

After outlining his point of view, he went into further depth on how the youth should concentrate their attention on climate action. Many polls indicate that youth figures will play an important role in the region’s future. Youth, as the backbone of the nation, will almost definitely be a game changer. This is bolstered by the fact that potential climate change would have a strong effect on the younger generation. At the end of the lecture, he gave the audience four main takeaways, which are detailed below:

Mr Rizki concluded at the end of his presentation that the youth should begin to develop a so-called energy-climate design thinking to break the silos in both sectors that can ended the common practice for both sectors to work individually.