The Role of Academia in Shaping the Energy Transition in ASEAN

Celebrating the first anniversary of the ASEAN Researchers Network on Energy and Climate Change (ARNECC), a public webinar was held to discuss the role of academia in shaping the policy for the climate-friendly energy transition in ASEAN. The webinar’s main objective was to disseminate the information about ARNECC publicly and discuss further the ideas on how academics can better convey their studies and inputs to support the development of energy and climate policies at the national and regional level.

Attended by 159 participants, the webinar was opened by a short video about the Profile of ARNECC. ARNECC was established due to the importance of energy-climate issues in ASEAN and the need for interdisciplinary research, which requires a new group of scholars, analysts, researchers, students and other stakeholders organized around the themes of energy and/or climate.

Subsequently, a short introduction was made by the moderator, Ms Rika Safrina, ICT and Data Research Officer of ASEAN Centre for Energy (ACE); followed by welcoming remarks from Dr. Nuki Agya Utama, the Executive Director of ACE; and H.E. Morten Hoglund, the Ambassador of Norway to ASEAN. Dr. Nuki hoped this webinar could give a new perspective on how ASEAN can strategies for a strengthen collaboration. While Mr. Hoglund mentioned, there is a silo between climate change and energy issue among academic. Thus, we need to interact more across different disciplines and learn from each other. He hoped this webinar could show people how everything was connected and eventually inspired future ASEAN leaders towards sustainability.

Following the opening, a keynote speech was delivered by Prof. Bundhit Eua-arporn, Ph.D, President of Chulalongkorn University. Throughout his presentation, he highlighted on higher education’s roles in shaping the energy transition. He emphasised how universities need to educate tomorrow’s leaders to be an agent of change in multidisciplinary issue. He also mentioned the challenges in universities in shaping the energy transition, which were the speed of technology changes, the complexity of processes, and the new platform of education required. To overcome it, several actions are needed, including new forms and platform of learning, instructors’ re-skilling, introducing new interdisciplinary curriculums, and sharing experiences among ASEAN countries. 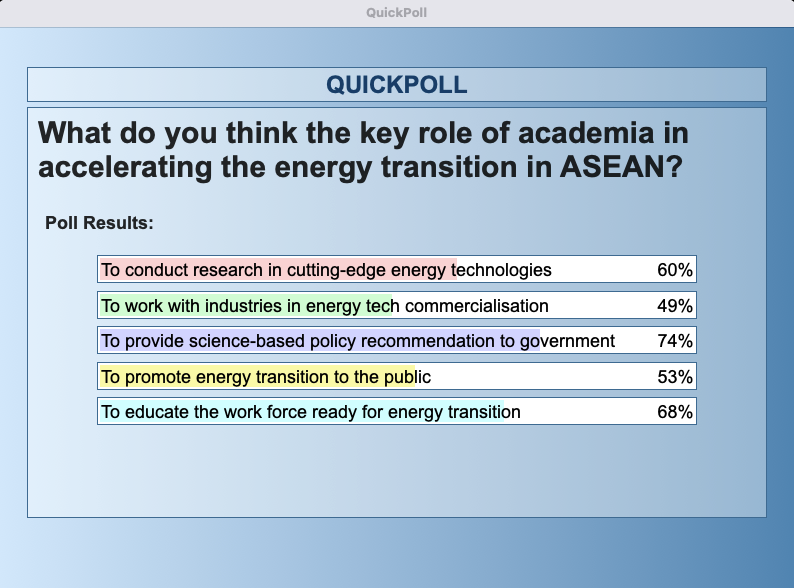 Before entering the main event, which was a panel discussion, Ms. Safrina, the moderator, invited the audiences to participate in an interactive poll, with a question, “What do you think the role of academia in accelerating the energy transition in ASEAN?”. The audiences were allowed to choose more than one answer. The result showed that the majority 74% of people believed academia’s role is “To provide science-based policy recommendation to government”, followed by “To educate the workforce ready for energy transition” with 68% and “To conduct research in cutting-edge energy  technologies” with 60%.

Next, the panel discussion was started with opening remarks from all four (4) panellists. The panellists mostly came from universities, which were Dr. Worajit Setthapun, the Deans of Chiang Mai Rajabhat University; Dr. Thang Nam Do, Research Fellow of College of Asia & the Pacific, Australian National University; Prof. Ir. Dr. Haslenda Hashim, Chair Resource Sustainability Research Alliance, Universiti Teknologi Malaysia; and Dr. Zulfikar Yurnaidi, Senior Officer, Renewable Energy and Energy Efficiency of ACE. Each of them highlighted their own experiences in academia related to contributing to the energy transition.

Dr. Worajit stated that there was a transition of the role of academia, which was from research, academic and culture conservation changed to research, implementation and working to industry to the market and the people. She mentioned that each university and lecturer have their own role. For example, in her university, the mission is “The university of the community”. In that sense, they focus on teaching and skill-building for the energy transition.

Meanwhile Dr. Thang stated that the role of academia was providing science-based evidence for policymakers. Since he had worked for 20 years with the government before, he realised that policymakers have many questions to answer, and they did not have time to do any research. Overall, all panellists agreed that the main role of academia was to provide science evidence-based and data-driven policy.

Afterwards, Ms. Safrina asked the panellists how academia could link the science with the policy because sometimes the research results may not be translated into proper policies. Prof. Haslenda commented that research should fit to policies and adapt with the national interests, while governments adjust on the research result. Dr. Thang also mentioned how important it was always to try to involve research with decision makers.

In the other hands, Dr. Worajit highlighted the importance of communication. Based on her experience, policymakers tend to speak to a really board term, while researchers tend to speak in a more technical way. Hence, the key is to find a middle way to work together in achieving toward the same goal. Dr. Zulfikar added on how ACE can be the catalyst between the academia and the policymakers. This also includes the role of ARNECC.

Subsequently, Ms. Safrina asked for the panellists’ suggestions for ACCEPT to be able to maximise synchronisation between energy and climate policies, as well as national and regional policies. Dr. Worajit then came back again on the role of the connector. It is crucial to connect things together. In order to break a silo, academia can move from different industries. This way academia can analyse different data and things together. Furthermore, Prof. Harlenda mentioned that since energy has multidisciplinary aspects, the university should teach cross-cutting issues to their students, such as sustainable development goals.

The third question asked was about ARNECC. Ms. Safrina asked the panellists how ACCEPT team can improve ARNECC. Dr. Thang suggested that it would be nice if ARNECC could organise a face-to-face event after the COVID-19 pandemic while continuing to organise joint activities such as research and webinar.

Near the end of the panel discussion, Ms. Safrina asked one of the audiences’ question: “Trust among others is crucial among academia and governments. Do you ever have experience building trust among academia and governments?”. From Dr. Zulfikar’s experience, it took time to build a project while working in ACE, as he needed to explain and re-explain to various stakeholders. The key is to keep moving forward.

After the panel discussion, Dr Rocky Adiguna, Ph.D, the Lecturer of Management Department, Faculty of Economics and Business, Universitas Gadjah Mada, gave a presentation about ASEAN Master in Sustainability Management, which was a master program created from the collaboration among Universitas Gadjah Mada (Indonesia), University of Agder (Norway), and ASEAN University Network. He mentioned that the master program was established due to the need for addressing sustainability issues in ASEAN and the lack of relevant competencies, skills, and capacity in environmental management among personnel in business enterprises and government institutions.

The webinar was closed by Mr. Beni Suryadi, ACCEPT Project Manager. He shared the one-year journey of ARNECC in getting various stakeholders together to talk about energy and climate change issues. The way forward in 2021, ARNECC will launch a research database, continue to host networking forums, organise the regular discussion, establish collaboration with universities, award more research grants, and organise the 1st ASEAN International Conference on Energy and Climate Change, in conjunction with ASEAN Energy Business Forum (AEBF).