The Power of Social Media to Fight Climate Change

By Bimo Andrio and Rika Safrina

Climate change remains a looming humanity issue because of how complicated and unintegrated the actions are. In 2015, when the world leaders collectively adopted the Paris Climate Accord, it seemed the world was together in fighting the inevitable enemy facing our next generation: climate catastrophe. But, five years later, it looks like we are far from rounding the corner of the “2oC” target.

A lot of people might still see climate change as an existential problem that needs gradual actions rather than drastic approaches. However, the actions taken today should be effective to avoid the severe impact on the future generation. Despite the lack of opportunities in the high seat of government, people can still speak out their voice to protect the mother earth. One of the main ways to greatly influence others is by utilising social media. The influence of social media is immensely huge today when many are relying on the internet to learn, gather information, entertain, and socialise. With the raging pandemic, educating and encouraging people through online media would be even more critical for fighting climate change.

There is no shortage of Influencers and Key Opinion Leaders

Through the internet, many ideas, knowledge, and opinions can reach people across the globe and help them get the education and essential services, and spark many innovations and movements. The internet has transformed from merely a way of communicating far distance into a modern distillery of ideas, and nothing speaks louder than Influencers and Key Opinion Leaders (KOL). Influencer means someone or a group that has a big influence because of their ability to attract a high number of audiences for their contents. Meanwhile, a KOL has expertise in a certain field with a preferred communication channel, usually social media.

In the field of climate change, there are some prominent influencers who are creating campaigns against global warming. Take, for example, Mr. Beast’s campaign of #TeamTrees whose main goal is to plant 20 million trees around the world. Started back in October 2019, the campaign has already passed its initial goal. It also received support from other prominent climate influencers such as Destin Sandler from Smarter Every Day Channel, and Elon Musk the CEO of Tesla.

Another example is Greta Thunberg, the young girl from Sweden, with an ambitious goal of turning her country’s parliament stand on climate change by starting a student movement called “Fridays for future” in 2018. Later the campaign continued as the global climate strike in September 2019 participated by 6 million people in 150 countries. Her 4800 KM voyage across the Atlantic Ocean on a zero-emission yacht, and the speech titled “How dare you?” during the United Nations Climate Action Summit has inspired young people across the world. The year 2019 was definitely the time when the public finally woke up to climate change. This awakening of climate concern mostly by young people was known as “The Greta Effect”.

Social media also creates an open space for organisations, climate activists, and scientists to reach more people across the world. One of the examples is how the UKCOP26 and the Green Peace use social media platform not only to share valuable knowledge about the current climate condition, but also to collaborate with artists, activists, politicians, and academic institutions to show how, nowadays, the world is on a constant state of climate emergency.

A massive audience with one voice could make the differences

During 2019, there were 15 climate-related disasters across the world resulting in $124.1 billion loss. They include disasters such as wildfire in the United States, typhoons on the coast of China and Japan, and massive flood happened in Australia and Spain. The grown number of thawed permafrost caused by warmer ground temperature also threatening large areas in the arctic circle which could further worsen the climate change with the release of methane gas. That is why If we look at the global trending topics during 2019 on Twitter, climate-related topics such as #ClimateStrike and #Typhoon are positioned in the top 10.

Not only becoming trends in social media, but the entertainment sector also started showing contents related to climate change, such as HBO’s “Years on Years”, “Ice on Fire” and even CNN Special Town Hall on Climate Change. This meant when a series of harrowing conditions such as climate-related disasters occurred. A wider message to broader audiences is formed and shared by people around the world. The examples of messages echoed around the world are Greta’s speech and the global climate strike. Both events become viral content on the internet. According to Google Trend, the search for “Climate Strike”, “Greta’s Speech”, and “Climate Change” spiked between 20-28 September 2019. 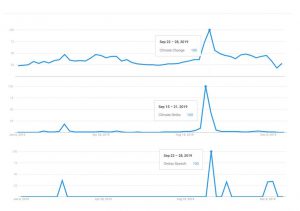 As the climate rhetoric went mainstream and catches the attention of decision-makers, several countries enacted a progressive climate move, such as the Net-Zero pledge by 2050. The movement was seen in the entire European Union and the United Kingdom in 2019, while China pledged to be a Net-Zero nation in 2060. In line with the urgency of climate change, ASEAN as a region has committed to achieving the 23 per cent share of renewable energy in total primary energy supply and 32 per cent in energy intensity reduction by 2025.

Those national and regional actions showed how many voices with one message could go viral, catch public attention, become mainstream, and affect how leaders would think about certain issues, including climate change.

Be wary, though, of the other side of the blade

Internet, as we know, is a very complicated place where contents, ideas, opinions, and news are circulated freely worldwide. Thus, social media possesses the ability to create complicated, even dangerous, beliefs. The freely accessible contents, often carried by algorithm, can spread hoax or inaccurate news viral.

One of the examples is how the YouTube algorithm brings up climate denial content in early 2020. A report by Euronews.com showed 21 per cent result pages from the searching keyword of “climate change” are false information that denied the CO2 contribution to climate change. Even worse, many of these videos were having adverts from big corporations such as Apple, Unilever, and even Greenpeace. Even though YouTube denied their involvement on this issue, it demonstrates how social media could spread misinformation about climate change.

The other drawback of the social media campaign is that sometimes it has no effect in the real world. According to Jennifer Whyte, an online engagement and content specialist from Oceana, not all climate change campaigns have well-planned targets, and sometimes strangely only benefit the creator. Even though the campaign is being promoted on social media to a big audience, it may not necessarily mean big actions. 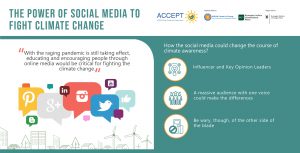 So, what’s next? As we headed to the second decade of 2000, the world needs to contribute more effective steps to realise the Paris Agreement targets. Human activities, especially from the energy sector, have a huge impact on climate change. If real and progressive actions are not taking place immediately, the young generations will endure the effect of worsening climate conditions. Social media obviously played a significant role in helping humans communicate, including spreading knowledge about the danger of climate change. With the growing number of climate movements and actions, the messages could create more awareness and reach the policymakers. Social media, then, might give us hope for the future fight against climate change.