Indonesia – Perspective of Women towards Inclusive Energy Transition in ASEAN

From Indonesia, Andriah Feby Misna, Director of Bioenergy; Directorate General of New, Renewable Energy and Energy Conservation; Ministry of Energy and Mineral Resources of Republic of Indonesia, gave her perspective on women in the Energy-Climate with her writing with the title “Perspective of Women towards Inclusive Energy Transition in ASEAN”. 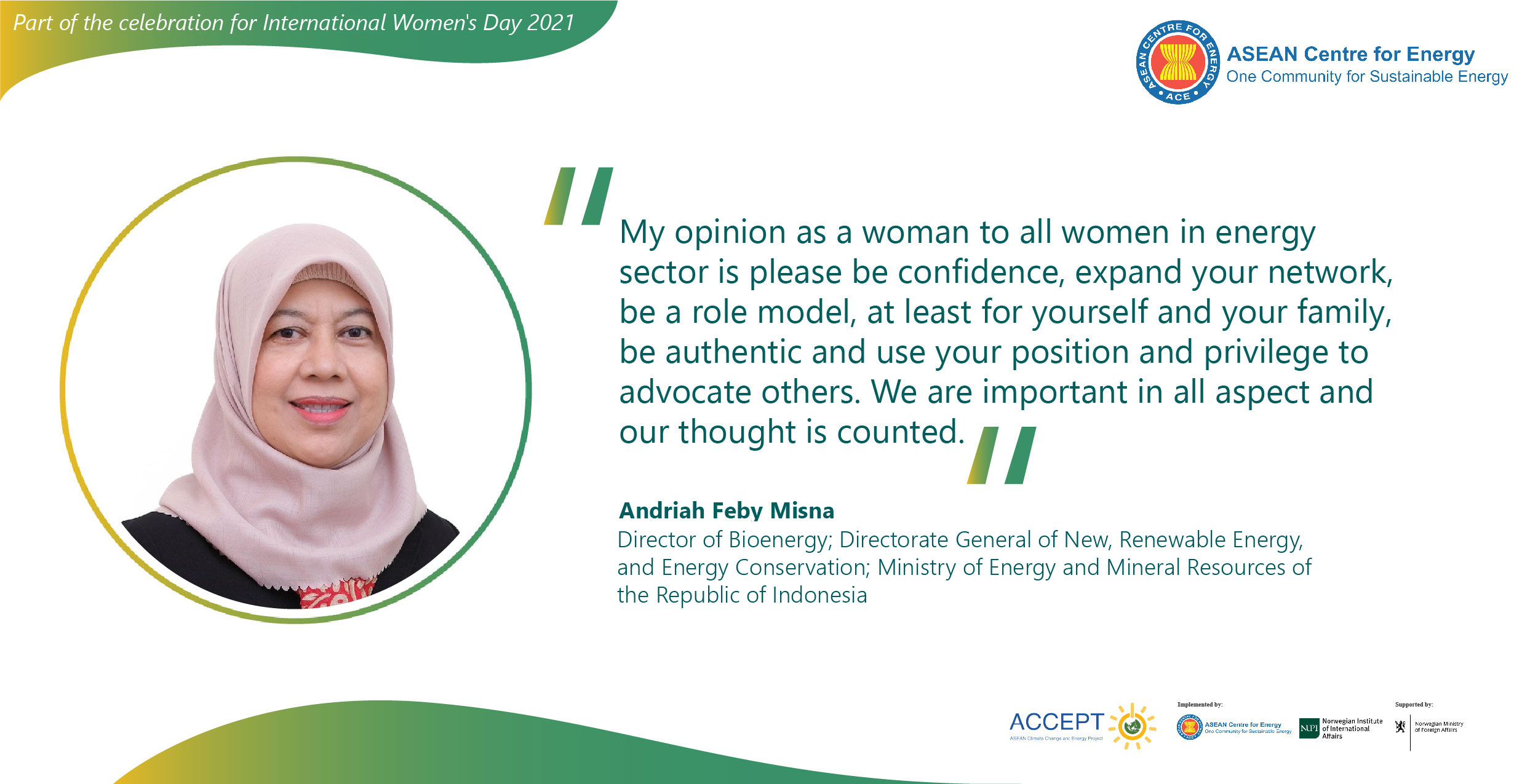 Indonesia is the largest country in ASEAN and also the largest energy consuming country in the region. Like other countries in ASEAN, Indonesia is struggling to meet its raising domestic energy needs amidst the declining of the natural resources. Maintaining the balance between growing energy consumption and environmental protection is another issue that we are facing. Shifting from fossil energy resources to “green” energy — renewable energy is considered as an efficient way to address the issue.

The role of women, which is still closely related to domestic roles, allows women to be both determinants and vulnerable to being affected by energy consumption patterns in a family or household. As a determinant, women play a major role in energy efficiency and emission reduction efforts at the household level, such as electricity saving and water usage as well as reducing household waste. And when it is affordable, women will certainly choose clean and environmentally friendly energy for their family’s purposes.

However, on the other hand, women are also vulnerable to the impacts, both positive and negative, of energy use. The negative impact of energy use for women should be addressed and accounted for when designing energy transition.

Failure to empower women to gain access to energy, will lead to greater poverty. This is also inseparable from the fact that the majority of poor people in the world are women. On the contrary, when women get access to good quality and affordable energy services, it will have an impact on reducing poverty, maintaining family health, and gaining income for their family.

The same role can be played by women to a greater extent. Women could provide added value at all levels and in all sectors of the energy issue and increasingly serving as agent of change in important roles as energy professionals, energy decision makers, energy entrepreneurs, and energy consumers.

Ministry of Energy and Mineral Resources (MEMR) promotes the mainstreaming and implementing gender equality which reflect in activities, programs as well as leadership or management positions. Currently there are 11 women holding directors’ positions out of a total of 55 units in our ministry (20%). There is an increase in the role of women as part of energy decision makers when compared to 2011, with only 6 women in director positions out of a total of 47 units (12.7%). Meanwhile, the overall participation of women in MEMR as employee has also increased from 22.8% in 2011 to 27.5% in 2021.

My involvement as a woman to be part of energy decision makers, can be seen as a step towards gender equality in developing energy transition. My job as Director of Bioenergy is closely related to achieve the energy transition and efforts to obtain the emission reduction targets as stated in Indonesia’s NDC. Bioenergy is a source of green and renewable energy that has unique characteristics and great opportunity to replace the use of fossil fuel in almost all sector of public life, including electricity, transportation, industry and household sectors.

The implementation of bioenergy that listed as measures in achieving Indonesia’s commitment to reduce greenhouse gas emission as stated in NDC are consist of waste management, including implementation of waste to energy and RDF, enhancement of landfill gas recovery, biogas from manure, B30 mandatory program, as well as methane capture and utilization from POME of Palm Oil Industries. Those activities or industries, both directly and indirectly are women intensive sectors.

One of the best practices to see the women’s role in energy transition is in implementation of Domestic Biogas and Biomass Stove Program. The Government of Indonesia is also eager to encourage the implementation of Domestic Biogas and Biomass Stove Program not only for increasing access to modern energy as well as to improve human welfare. Most of rural people still use traditional wood-fired stoves in their daily life which classified as unclean, unhealthy, and inefficient. Indoor air pollution caused by the burning of solid fuels in traditional stoves is one of the leading risk factors attributed to mortality and burden of disease. Biomass stoves with biomass pellets from local potential may offer a pathway to clean energy for communities with lower income or in area where electricity or gas are not yet viable.

The Biogas Program is intended to be a solution for meeting household source of clean energy by using mainly livestock manure to organic kitchen waste. This program can help meet the needs of daily household energy source ranging from electricity, natural fertilizer to gas for cooking. We see that women needs to address their critical need for domestic energy that is less labor-using, more convenient and safer. Through this program, women are involved in becoming users, producers and decision-maker with several benefit including to reduce family expenses for buying fuel, time efficiency, and improve the daily living conditions of women and their families.

Personally, it is great experience to be one of the main actors in the bioenergy sector. Apart from its uniqueness and great ability to replace fossil energy, bioenergy provides more opportunity for women’s involvement starting from the household sector, industry, business sector to decision-making level in government offices. Directorate of Bioenergy is one of the units in MEMR which has an almost equal number of female and male employees, where women participation is around 43%.

MEMR also developed several strategies in order to increase both the contribution of renewable energy and gender equality implementation through the implementation of Solar-Powered Lamp with Energy Saving (Lampu Sehat Hemat Energi/LTSHE) and Solar PV. This program is focused on eastern and remote parts of Indonesia which aims at increasing electrification ratio by utilizing renewable energy as well as provide opportunities for women to do various (economic) activities at night such as weaving, cooking, etc which have an impact on improving family welfare.

It’s beyond question that until now, women still face various challenges to achieve gender equality because of the many conventional stereotypes, including in energy sector. Women’s empowerment is the one of the keys to increase energy accessibility, which eventually lead to successful energy transitions. Women’s empowerment is a process whereby women’s lives are transformed from a situation where they have limited power as a consequence of gendered barriers, to a situation where their power is equal to that of men.

My opinion as a woman to all women in energy sector is please be confidence, expand your network, be a role model, at least for yourself and your family, be authentic and use your position and privilege to advocate others. We are important in all aspect and our thought is counted.