Energy transition and decarbonisation are becoming increasingly critical to addressing the ever-growing concerns of climate change. In spearheading decarbonisation efforts, we must pay special attention to the development of hydrogen.

Hydrogen is more than just another option that we can add to the long list of clean technology as it can provide an energy supply which is uniquely flexible. This added flexibility can empower existing clean technologies to reach their full potential in areas that would otherwise have not been possible. Amid clean energy growth, this may prove to be a keystone for decarbonisation efforts.

The other energy world

In a world proliferated with many ‘zero-carbon’ innovations, a clear vision of the role hydrogen plays in reducing emissions can be difficult. To illustrate hydrogen’s role in meeting energy demands, it may be helpful to simplify the world’s energy uses into two separate energy consumption ‘worlds’. The ‘electricity world’ provides for end-uses like computers and other electronics and the ‘fuel world’ which provides for demands such as cars and gas stoves.

While both these worlds seek rapid decarbonisation solutions, individual energy consumptions are annoyingly picky. Consumption can only be satisfied if it is met with energy supply in the right location, time, and form. This state poses a myriad of constraints on electricity-supplying clean technologies like solar, wind and geothermal energy – all of which are touted as ‘renewable energy’ technological stars of the 21st century.

On a global scale, the alternative technology-rich electricity and power sectors only accounted for 18.9 percent of the total energy consumption in 2017. The remaining 81 percent of the energy demands in the fuel world do not enjoy the same selection of abatement options, making their decarbonisation more complicated and challenging.

To possibly attain deep carbon abatement, it is critical that we find good ways to funnel more existing abatement solutions into that fuel-dominant 81 percent. In an attempt to facilitate that, the concept of ‘electrification’ – turning traditionally fuel-run processes into electricity-run – gained traction.

This concept is part of the reason electric cars and industrial electrification have made their debuts. Nevertheless, this, too, faces severe limitations to how much of the fuel-dominated 81 percent can we feasibly migrate to the electricity world. However, an alternative solution is emerging.

That solution is hydrogen. Hydrogen is the second scalable energy carrier that has the potential of bridging the gap between zero-carbon energy supplies and targeted energy demands. In an incredibly unique way, hydrogen presents itself as the sole commercial technology to transform energy from electricity to its fuel form.

When a new channel like this joins the major energy forms of electricity and fuel, many subsystems in the energy system that have either no or limited ties previously will be bridged for the first time. Thanks to these new linkages, renewable energy is allowed to compete in battlegrounds it was once forbidden to enter. Because hydrogen has direct industrial uses, it enables solar and wind technologies to supply clean hydrogen directly without the need to produce it by carbon-intensive methods. Because of hydrogen’s undisputed superiority in energy density, it can rival traditional fossil fuel technologies in long-haul freight shipping, a weakness that forbade electricity and batteries from entering the same market. 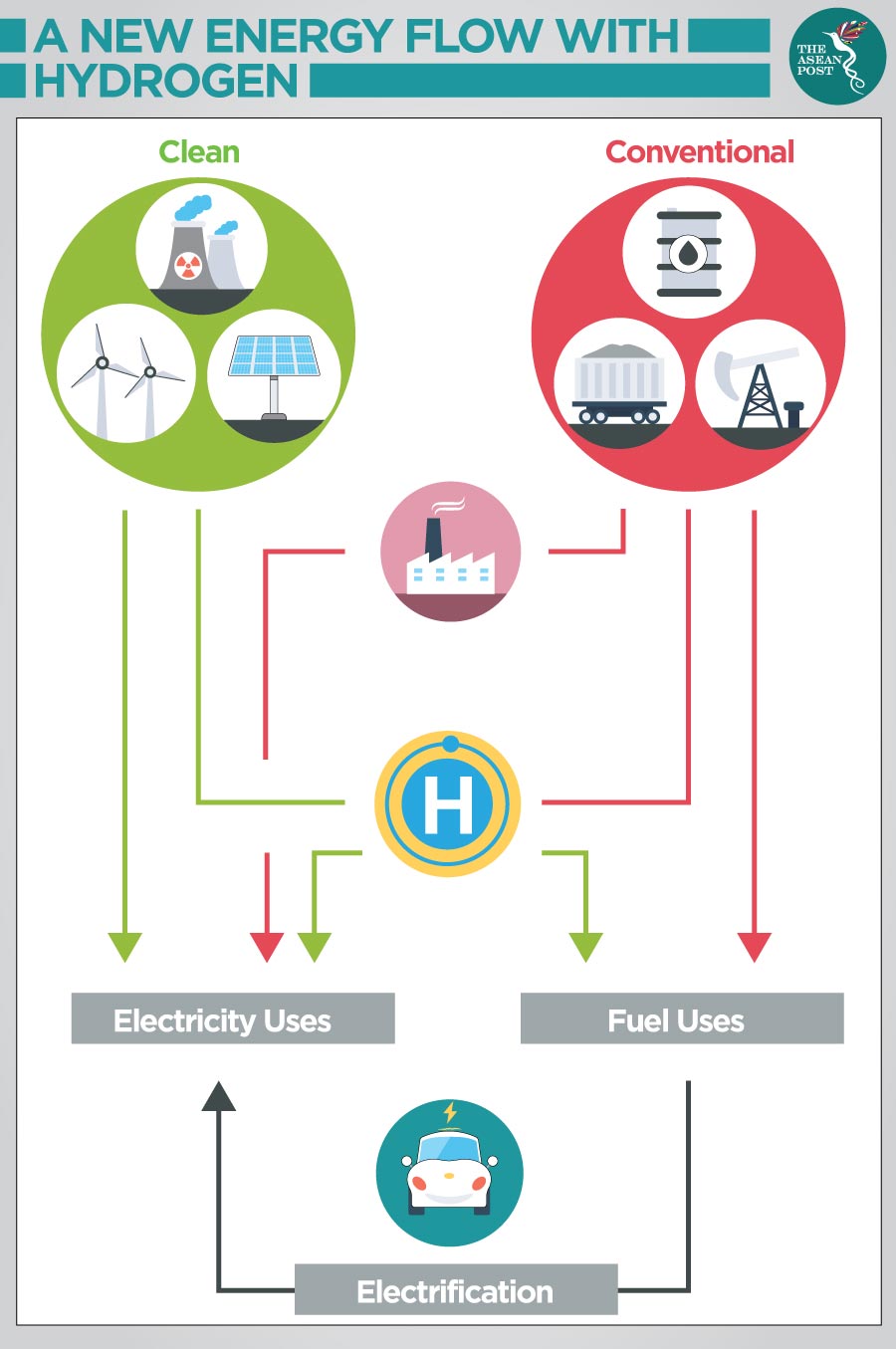 As a testament to the flexibility of hydrogen in guiding energy transfer in a complex energy supply chain, the Energy Transition Commission has affirmed that hydrogen will play a major role in decarbonising “harder-to-abate” sectors and projected that increase in the demand for this technology could be as much as 11 times. In their initiative named “Mission Possible”, a series of decarbonisation strategies have been drawn for those “harder-to-abate” sectors, and hydrogen is unanimously cited as one of the prospective solutions. With such versatility, it is easy to see why hydrogen can become one of the most important technologies to be added to the toolkit of energy transition.

But despite the surrounding excitement, hydrogen is no new concept. There have been several previous waves of hydrogen that unceremoniously ended without any fruition in the 1970s, 1990s, as well as early 2000s. In a fashion similar to “the boy who cried wolf”, there are many calls for scepticism over how this cry of excitement will be any different from the last. After all, there is still a steep curve in trying to get pilot technologies to market hydrogen while facing the headwinds of fierce market competition from incumbent technologies.

Nevertheless, at this juncture it is also worth remembering that the development of hydrogen, like all technological developments, will have to walk its rite of passage through decades of technological and economical trial-and-error before finally making its way to commercialisation. But with every wave of development of hydrogen technology, the possibility for the technology to take off becomes more imminent. In the past few years, major institutions like the Hydrogen Council, International Hydrogen Fuel Cell Association in China as well as the Australian Hydrogen Council have sprouted up in quick succession, echoing global momentum in hydrogen development.

Unlike the first few waves of hydrogen development which had their main focus on hydrogen transport (in which hydrogen vehicles are still struggling), hydrogen has drawn attention from a much wider range of applications which parallels its full potential. With the dramatic increase in the number of sectors interested in its development, hydrogen is experiencing overwhelming international and cross-sectorial awareness as never before.

This shift, combined with rising global calls for decarbonisation, means many sectors are counting on the maturity of this technology as an escape route to live up to the ever-tightening targets of global emission regulations. Therefore, new hydrogen-related projects that have been deployed in the past 10 years have been increasingly diverse.

In ASEAN, we are beginning to see countries embarking on the pursuit of hydrogen as a new energy carrier. In the past few years, Malaysia had its first hydrogen buses taking to the streets in the city of Kuching in the state of Sarawak. Brunei set up its first international hydrogen supply chain with the Advanced Hydrogen Chain Association for Technology Development (AHEAD). Singapore has also begun test-bedding hydrogen systems with the Renewable Energy Integration Demonstrator Singapore (REIDS) – a R3D (Research, Development, Demonstration and Deployment) platform.

But despite these developments, the hydrogen economy is still at its infancy in ASEAN and Southeast Asia could benefit significantly by drawing experiences from Japan and the European Union.

Once again, the waves of hydrogen development pushes one step closer to taking off. The tide rises. Opportunities and critiques alike watch on. As these waves crash against the rising shores, perhaps the critical question is: when the time is due for hydrogen, will ASEAN be well-positioned to take advantage of it?

Gao Yiming is a member of the ASEAN Climate Change and Energy Project (ACCEPT) at the ASEAN Centre for Energy (ACE). The The opinions expressed in this article are the author’s own and do not necessarily reflect the opinions of institutions or organisations that the author may or may not be associated with in professional or personal capacity unless explicitly stated.

This Op-Ed originally appeared in The ASEAN Post, 24 November 2019.