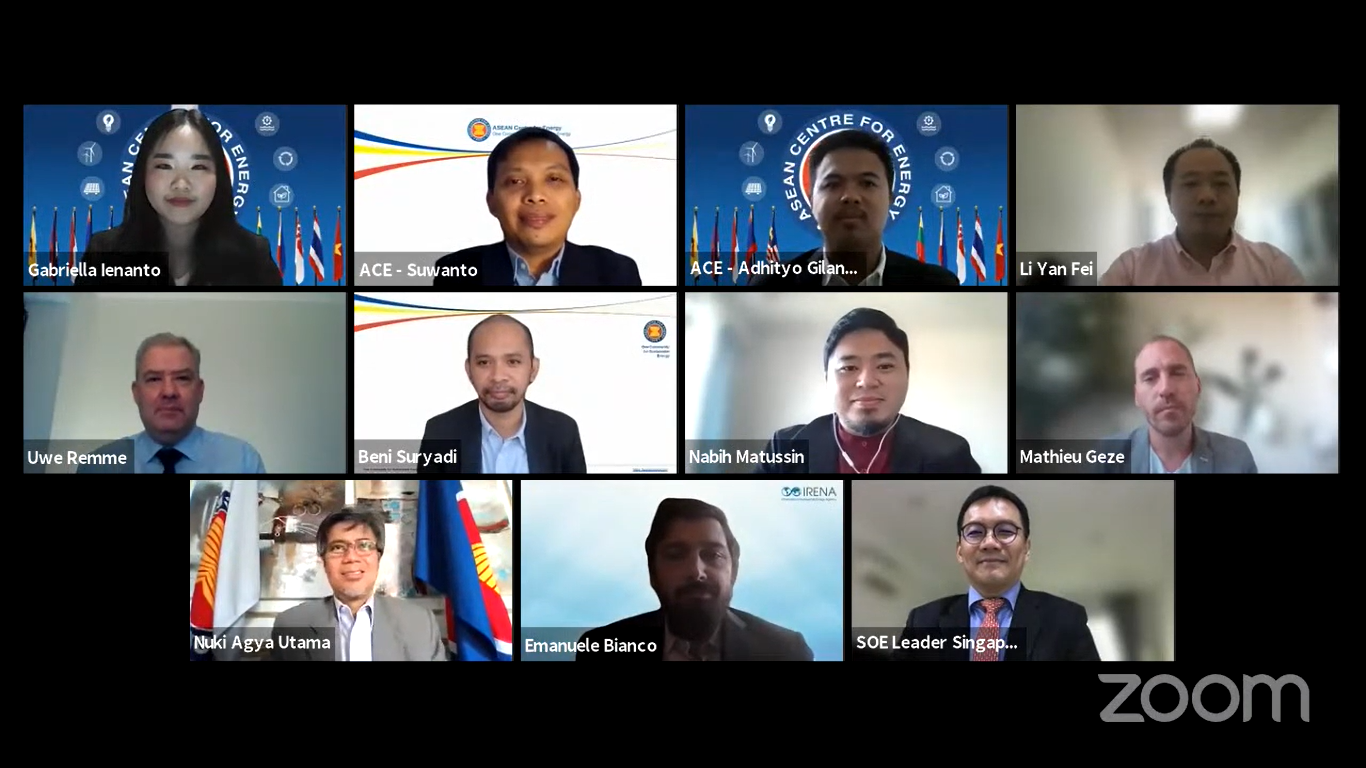 Opening remarks and introduction of the programme was given by Mr. Jonathan Goh Kok Chye (Director of External Relations of EMA and Singapore’s Senior Officials on Energy (SOE) Leader. He highlighted the need of hydrogen to support sustainable energy transition in region. He also mentioned remaining challenges that needs to be solved to make hydrogen an important energy source.

Mr. Suwanto, as one of the authors, stated that the motivation of the study was drawn from the conclusion of The 6th ASEAN Energy Outlook (AEO6), that ASEAN will highly depend on fossil fuel as main energy source. Nevertheless, hydrogen will become a key energy source in the future, as industry and transportation sectors are aiming to decarbonise the energy system.

The need for hydrogen as new main source can be seen from the fact that ASEAN have resources to develop indigenous grey, blue, and green hydrogen. In addition, ASEAN Member States own relevant infrastructures to further develop hydrogen energy in the region. Progressive developments have seen the combined cost of hydrogen and fuel cell electric vehicle decrease, attracting stakeholders to shift towards sustainable road transportation while reducing emission. Hydrogen could also be used as energy storage and act as a future clean energy supply. Related studies have shown hydrogen utilisation the application of power storage, transport, and export.

Mr. Bhaskoro continued the presentation and explained the findings of hydrogen when implemented under three applications stated above. In power storage application, hydrogen could be stored for renewable energy in the form of gas or liquid to generate electricity. This study compares the Levelised Cost of Electricity (LCOE) of renewable energy (RE) storage alongside other technologies, and discovered that hydrogen has a higher cost compared to other technologies and not economically competitive yet.

In transport application, this study compares the Total Cost of Ownership (TCO) and carbon emission of different engines in three types of vehicles, namely passenger car, bus, and truck. Authors discovered that the TCO per kilometre of fuel cell vehicle is two to three times higher than vehicles with gasoline and diesel. But when coupled with green hydrogen, fuel cell vehicles have the lowest carbon emission compared to other powertrains. Hydrogen is most suitably developed for long heavy vehicles, where the authors also compared the TCO of different engines in bus and truck. Application for bus and truck is three times higher than diesel bus and truck, which is not economically attractive.

In export market application, this study calculates hydrogen costs in all ASEAN countries by considering the transport costs from ASEAN to developed markets, such as Japan, China, and South Korea. Authors discovered that Brunei Darussalam and Indonesia would produce the grey hydrogen at lower cost, which is quite attractive for Japanese market. The study also simulates the cost of green hydrogen in 2030 considering the reduction cost of RE electricity by 70% and hydrogen production facility by 50%. By this analysis, it is revealed that the cost of green hydrogen could be significantly reduced by 49% that make it competitive against fossil fuel in 2030 in some advanced markets.

The authors also give recommendation to develop a regional policy roadmap in three phases. For the first phase of 2021 to 2025, the plan is to develop capacities in producing and exporting grey hydrogen for countries with advantage of fossil fuel resources and scale of existing infrastructure. Second phase of 2025 to 2030 considers to develop blue hydrogen to mitigate the emission using carbon capture and storage (CCS) technology. Last phase of 2031 onward, hydrogen from electrolysis could be deployed as energy storage for intermittent renewables to provide auxiliary grid services and also for export market.

After the launching of the reports, the webinar continued with panel discussion, which is moderated by Mr. Beni Suryadi, the Manager of Power, Fossil Fuel, Alternative Energy and Storage. The panel discussion began with Dr. Uwe Remme (Energy Analyst, International Energy Agency) stating about the important role of hydrogen to balance energy needs in various sector. Which is why, scaling up production of hydrogen is necessary, because global hydrogen demand will increase from around 90 megatons present, up to around 500 megatons in 2050. Dr. Remme also elaborated different ways to produce hydrogen and estimated its capacity by 2050. Dr. Remme believes opportunities to scale up the production of low carbon hydrogen is not out-of-reach.

Mr. Emanuele Bianco (Programme Officer – Policy, International Renewable Energy Agency) provided the  possible measures for policy makers to assist development of hydrogen in the region. Mr. Bianco also explained possible strategies to provide a vision on what the hydrogen sector will look like in the future.

Mr. Muhammad Nabih Fakhri Matussin (Visiting Researcher, Asia-Pacific Energy Research Centre) then provided the highlight from Energy Demand and Supply Outlook 7th Edition which states the increasing demand for hydrogen in the transportation sector as the most dominant sector and rapid demand growth in the building sector.

In the final phase of discussion, all panellists alongside authors of the report, including Dr. Yanfei Li (Associate Professor, Hunan University of Technology and Business, and Business Research Fellow, Economic Research Institute for ASEAN and East Asia) as one of the authors  of this report, discussed their thoughts on the utilisation of hydrogen technology in ASEAN region. At the end of the event, each panellist share their thoughts  about the necessity to escalate hydrogen development. As a conclusion, the involvement of policy makers in ASEAN is crucial to enhance hydrogen production within the region.