The focus of the dialogue is related to Asia and its decarbonizing journey, and what’s following in the future. Ms. Michelle Meineke started the webinar by showing a list of the top 10 Energy Transition (ET) news of the week and asked the three speakers to comment on specific news they had their eyes on. News on net zero actions and innovative financing are among the talking points.

Dr Ning Lin stated that China has 50 billion tons of coal consumption which led it to become the largest consumer globally and followed by India. Hence, it will take time and efforts for China to “turn the ship around”, shifting from its current position to reach the 2060 net-zero goals as coal and oil alone hold about eighty percent of China’s energy system. The financing sector also one to be considered. Mr. Vasuki pointed out that the energy transition should not only put coal on the spot, but also the fossil fuels and its subsidiary, which are also common fuel used in many developing countries, transportation sector. The climate challenges also emerge in Southeast Asia, especially Indonesia, the host of the largest rainforest, Borneo. Amazon and Borneo are considered as two large factories for absorbing global carbon; however, the unfortunate annual forest fires in Borneo impacted its sustainability.

United States is undeniable still having huge influence on global affairs, and as Biden’s administration brought United States back to Paris Agreement, Dr Zulfikar noted that the pressure for the other countries to move into the climate friendly economic development is increasing. But what is important, is on how countries, who already declared net zero, can reach the net zero target successfully through clear accountable roadmap. In relation with China, US is leading liquefied natural gas (LNG) export to China. Based on the IEA’s report, China’s gas is supposed to grow in 4% while to reach the net zero goals, China needs to knock down the demand to 1%. 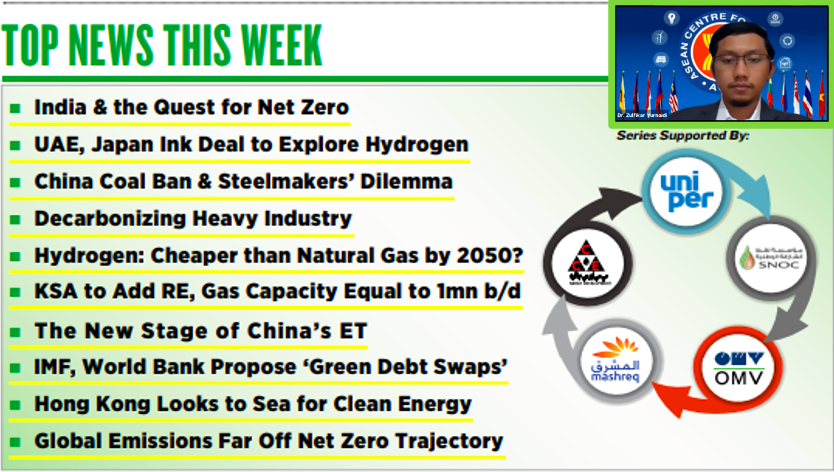 The Asian Development Bank (ADB) was reported to received 300 million USD to fund the climate resilient. According to Dr Zulfikar, in last year ADB already gathered 1.4 billion USD from South Korea and other institution in co-financing, and it is reported that with the economic growth in Southeast Asia, a gap of infrastructure fund reached up to 100 billion annually. Hence, the necessity to fill in the gap with green and climate friendly technologies and infrastructures would be some homework for the ASEAN Member States (AMS).

People are hopeful that China and the rest of Asia able to achieve the energy transition because this will give positive impact on renewables investment in the region. However, the question is on how to integrate this rapid development into the power grid. Also, it is important to ensure that the economic growth sustains amid the energy transition.

Advocating ASEAN member states on the energy transition towards climate friendly economy has been one of the focuses of ACCEPT. Active participation in the regional and international discussion, and its dissemination are key strategies to increase public awareness as well as capacity of key stakeholders.