Recent announcements by Indonesia’s state-owned utility company Perusahaan Listrik Negara (PLN) to achieve carbon neutrality by 2060 must be met with caution and scrutinized as the numbers don’t stack up, according to a new report from the Institute for Energy Economics and Financial Analysis (IEEFA), “Putting PLN’s Net Zero Ambition Into Context“.

The report’s authors IEEFA energy finance analysts Elrika Hamdi and Putra Adhiguna say that PLN and the Ministry of Energy and Mineral Resources (MEMR) should be commended for their commitments to long-term climate change mitigation targets. However, these statements don’t appear to line up with their current and medium-term energy sector policy initiatives, although some positive developments do appear.

Both Elrika and Putra were joined the discussion at the ACCEPT In-house Sharing Phase #3 Episode #3 held on July 7, 2021. 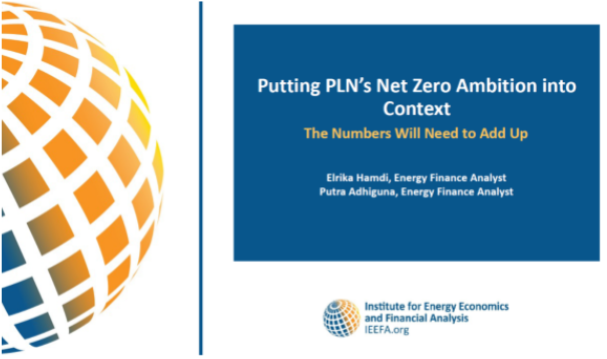 The willingness of high-profile Indonesian government officials to sketch out new commitments to long-term climate change mitigation targets suggests that the issues are getting more attention from senior policymakers and facing more pressure from the public to keep pace with public expectations.

So far, policymakers leading this new climate-friendly initiative should be pleased with the media response as the headline commitments were greeted with positive coverage. Indeed, there has been some positive development within the plan. However, what often falls under the radar is that the

high-level statements and current and medium-term energy sector policy initiatives do not appear to line up. This is something that analysts and sector experts cannot overlook.

Many countries in ASEAN, including its companies, are looking to the idea of net-zero. Hence, ACCEPT is exploring this topic’s knowledge to support the ASEAN Member States.