On 28th April 2021, ASEAN Centre for Energy (ACE) organized the 19th ASEAN Forum on Coal Council Meeting (AFOC) hosted virtually by the Department of Energy of the Philippines. The one-day meeting started with opening statements on the afternoon session from Mr. Nenito C. Jariel, Jr as the Vice Chair of the Meeting, Mr. Abdul Razib Dawood as the AFOC Chairman, and Dr. Nuki Agya Utama as the Executive Director of ACE.

Mr. M. Rizki Kresnawan, ACCEPT Research Analyst, had the opportunity to present the findings of the ACE‘s Baseline Study on Regional CO2 emissions from Coal-Fired Power Plants (CFPP) as part of Agenda Item 5 on the discussions on the progress of the cooperation between stakeholders. This study was mandated from 17th annual meeting of AFOC Council in order to get the baseline assessment of CO2 emissions of CFPP in ASEAN.

During the meeting, Mr. Rizki presenting the findings of the study to AFOC members on the reference emission factors based on combination of different type of coal and CFPP technologies, using the given data from AFOC member. The study found that among all CFPPs in ASEAN, the lowest emission factor is found to be a Supercritical CFPP fueled by bituminous coal in Philippines at 782.05 g-CO2/kWh, which called as Best Available Technology (BAT) while the highest emission factor is found to be a Subcritical CFPP fueled by lignite in Lao PDR at 1404.67 g-CO2/kWh. Apart from that the study also calculated the gross CO2 emission factors from the country target scenario called ATS and regional target scenario named APS from AEO6 report, which those numbers are very close with the emission factor from Thailand Ultra-supercritical Lignite for ATS and Vietnam Subcritical Bituminous for APS, respectively.

In order to profile the decarbonization potentials when the gross CO2 emission factor of ASEAN’s entire CFPP fleet is set to reach the levels of “BAT”, “APS+”, and “APS”, there is an assumption that the gross CO2 emission factor will reduce linearly. Arguably, for individual plant, these standards are possible since they already exist in AMS, such as the Philippines, Malaysia, and Vietnam. However, there would be practical challenges for all CFPPs in AMS to reach the same level of standard given the different national circumstances.

To conclude the study, Mr. Rizki examined that even though CFPPs are still expected to contribute to 25.7% of total electricity production in the baseline scenario by 2040, recognition of the environmental benefits will be a wise action to be pursued by ASEAN through setting a higher emission standard for CFPPs in ASEAN that would certainly contribute to the decarbonization. Therefore, ASEAN should consider putting in place a regional policy and perhaps to explore the possibility in establishing a roadmap for emission standards of CFPP while, of course, taking into consideration varied national circumstances among AMS as well. 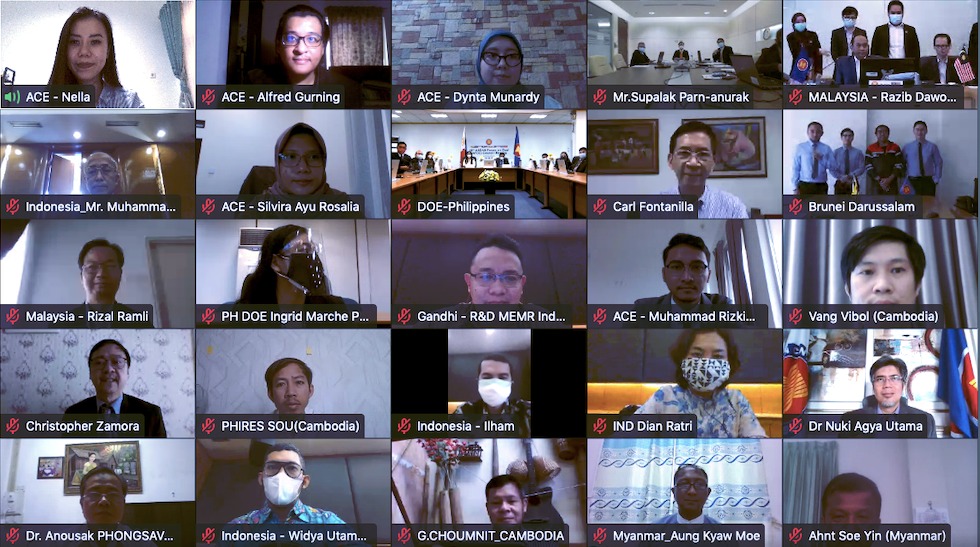 Moving beyond boundary of CFPP efficiency and coal-rank would imply the considerations of more advanced measures, such as Integrated Gasification Combined Cycle (IGCC) and Carbon Capture, Utilization, and Sequestration (CCUS) as some notable CCUS demonstration in Gundih project in Indonesia and the K5 project in Malaysia while co-firing with biomass can also represent a possible avenue to reduce the emission factors of CFPPs in ASEAN given the region’s abundance in biomass resources. The establishment of a carbon market, such as carbon pricing or emission trading scheme could provide incentive for investors to consider investing in such low carbon options.

To wrap up the meeting, the AFOC Chairman summarize all the meeting starting from the first session and second session. After that, they discussed about the date and venue for the next meeting. Thailand suggested hosting the next event, but it still has not confirmed.